Where do we even begin with the AI part of the project?

Well, I think it'd be a good idea to get the details of plugging a custom network into Donkey out of the way first.

If you remember the first autopilot we trained for sanity checking purposes, you'll recall we've used an architecture that came with Donkey, whose source can be found at donkeycar/parts/keras.py.

And that's pretty cool, we've already got a fair number of architectures to play around with out of the box. But we'll want to do things our way, make some custom architectures and play around with all sorts of stuff. It's also beneficial to be able to visualize how all of the pieces of your project come together before you dive all the way down into the details of it.

For now, I won't get into the details of machine and deep learning. That's a whole other bullet to bite, and a science of its own. One that I'm also in the process of getting to know. If you want to understand all of the details of the following content, you'll need to have some working knowledge of ML/DL. It's also okay if you don't. You'll be able to follow along and get your feet wet, you just probably won't get some implied details and minutiae.

Enough philosophising, let's get to work!

How do the architectures that come with Donkey work?

First things first, let's see how the architectures we get out of the box with Donkey work.

You don't have to, and usually probably won't, do this the way I'm doing it, which is going through the source code files and seeing what happens. You can consult the documentation or ask for help on the official project channels, but I love this approach since I believe you'll get a better sense of how something works if you look at the insides of it. I'm also used to hacking and taking things apart just to see how they work, (see ivanorsolic.github.io for examples) and sometimes you don't have the luxury of good docs and people willing to help you, so it's useful to be able to dive into the internals of something and make sense out of it. I also just think this way is much more fun 🤓, but YMMV.

SKIP TO THE TL;DR

When we wanted to train our first autopilot with Donkey, we used the train flag to tell the manage.py script to train a model.

So if we open up the manage.py script and look at the main method, we can see how the script handles the train flag:

So, we'll open up the train.py script, and find the definition of the multi_train function:

We can see that it chooses the train function as the default function for training the models, but can also use the sequence_train function if the architecture is a sequential network. Cool!

Since we won't be implementing a custom sequential network, we'll take a look at the default train function. There's a lot going on inside the function, from managing the data and creating generators to split it into batches for training to handling different model filetypes, but we don't have to, and won't go through all the details. That's one of the reasons we're using Donkey, so we don't have to everything by ourselves.

Our goal is to use a custom architecture with Donkey, and we're trying to find out how Donkey uses the pre-defined architectures, so this line is very much of interest to us:

The function above is imported from donkeycar/utils.py, so we'll open that script up and find the definition of the get_model_by_type function:

This is exactly what we were looking for. We can see that the function:

It also defines the image shape and the region of interest crop that some models use, and sets the model type to the default type (defined in myconfig.py) if the type isn't explicitly passed through the type flag.

Okay, so now we know how the manage.py script gets the Keras model it then trains.

Let's take a look at keras.py to see how to define a custom architecture/model.

We can see that there is a base class already prepared for us, that implements functions that all models use, such as model and weight loading, training and setting the optimizer of the model:

The only three functions we need to implement ourselves in our custom class are: compile and run (and the constructor)

Let's look at the default architecture, the KerasLinear class:

We can see that this particular class uses the roi_crop variable along with the input_shape, that gets passed to it through the utils.py script.

The class inherits the base KerasPilot class, and sets the self.model using the default_n_linear function, which actually implements the architecture in Keras.

It also compiles itself using the default parent class optimizer (adam), and uses the mean squared error as the error function.

Let's look at the actual Keras implementation in the default_n_linear function:

And that's the last piece of the puzzle. It takes the number of outputs, the input shape and the region of interest via parameters, and implements a Keras model.

So, in summary, what are the steps for making your own architecture?

TL;DR: How to implement your own architecture

First, we have to come up with an architecture to implement.

We'll use Nvidia's CNN architecture from the End to End Learning for Self-Driving Cars paper by M. Bojarski et al.

Why this particular paper? Well, I think it's fitting since it has a nice bit of self-driving RC history behind it.

As Nvidia states on their blog, explaining the project behind the paper:

The groundwork for this project was actually done over 10 years ago in a Defense Advanced Research Projects Agency (DARPA) seedling project known as DARPA Autonomous Vehicle (DAVE), in which a sub-scale radio control (RC) car drove through a junk-filled alley way. DAVE was trained on hours of human driving in similar, but not identical, environments. The training data included video from two cameras and the steering commands sent by a human operator.

Hey, would you look at that! Back in 2004, DARPA had a seedling project which had an RC car autonomously drive through a junk-filled alley way. It was around the time the first DARPA Grand Challenge took place, in which a full-sized car had to autonomously navigate a 240 km route in the Mojave desert.

No cars managed to finish the course that year, with the best competitor's car (Carnegie Mellon) traveling a mere 11.78 kilometers. 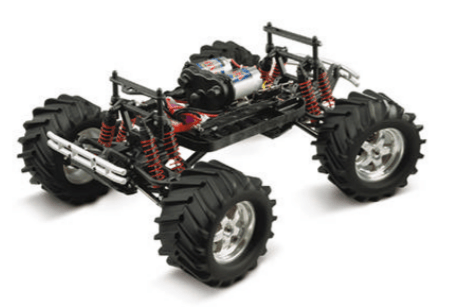 I recommend reading about the original (and subsequent) DARPA Grand Challenges, and the DAVE project. It's pretty fun to see how the history of autonomous vehicles began, and how the early researches found out about all of the challenges and their solutions on the way.

There's also a documentary about the DARPA Grand Challenge called The Great Robot Race by Nova. You can easily find it online.

Here's a picture of the architecture, taken from Nvidia's blog: 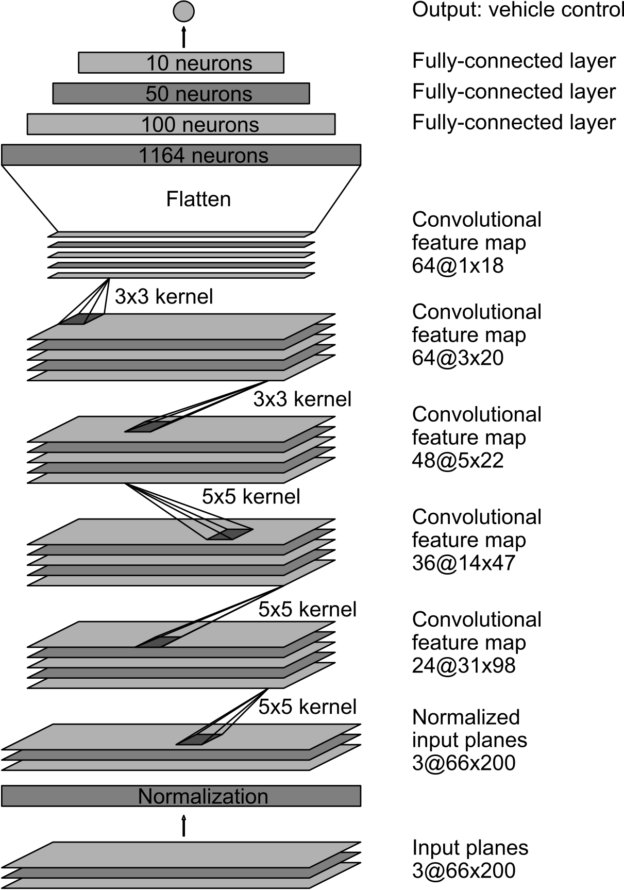 As Nvidia says in their blog post, the architecture consists of 9 layers, including a normalization layer, 5 convolutional layers, and 3 fully connected layers.

We follow the five convolutional layers with three fully connected layers, leading to a final output control value which is the inverse-turning-radius. The fully connected layers are designed to function as a controller for steering, but we noted that by training the system end-to-end, it is not possible to make a clean break between which parts of the network function primarily as feature extractor, and which serve as controller.

I used the KerasLinear class as a starting point, using its adjust_input_shape method to crop the image to the ROI passed to the model, since I think that's a good way to get better performance.

I've also made the following adjustments to the original architecture:

This is what the above described architecture looks like implemented in Keras:

Now we need to implement our custom class, inheriting the base KerasPilot class:

Now we need to add our custom class to the utils.py script so we can use it through the manage.py script. I've appended the following lines to the get_model_by_type function, right after the rest of the pre-defined architectures:

And that's it! We can now train a model using the manage.py script. Here's the result of training the architecture using this test dataset and running it in the simulator:

Not bad, considering it's trained on a really small dataset. Also, it's not the best driving data around. You can see it on the sharp 90 degree turns. It first goes as near as it can to the middle line, to take a swing so it can enter the turn faster. If we'd trained it on a much bigger dataset, with better driving data, it'd work better.

Let's move on to the next chapter, how to train your model.