Master recipe: How to learn your machines

Master recipe: How to learn your machines

These are notes I made while I was taking the Deeplearning.ai Deep Learning Specialization, more specifically, the awesome Improving Deep Neural Networks: Hyperparameter tuning, Regularization and Optimization course, through which Andrew Ng lays down a basic recipe for training your machines! I highly recommend you taking it, it's free and you'll absolutely learn something even if you're an experienced ML practicioner.

This may very well be the most useful part of my project. Be sure to at least take a look. 🙂

One of the first questions while preparing you should answer is how to split your dataset? One good practice is to split the data into three parts;

How to split the data (size-wise):

Make sure your training and dev/test sets come from the same distribution.

How to know if your model has high variance or bias (or both):

Here's a great illustration by Andrew Ng on what high bias and variance look like:

The two key things to take away are:

Basic recipe for learning your machines

If you have large bias:

If you have large variance:

Don't worry about the bias-variance tradeoff if you're doing deep learning. It isn't much of a thing anymore:

If our cost function is defined as:

The first part uses the regularization parameter $\lambda$, which is a hyperparameter to be tuned using the dev set, and divides it by $2n$, which is just a scaling constant.

The second part uses the Frobenius norm (basically the L2 norm of a matrix), and it basically sums up the squares of all the elements of all $\mathcal{w}$ matrices we use:

When implemented, during backprop the $W^{[l]}$ matrix gets multiplied by $\frac{\lambda}{n}$, a number slightly smaller than 1, which is why it's also called weight decay, since the weight loses just a bit of it's value.

Why does this help?

If we set the $\lambda$ parameter in the regularization term below to a large value, it will set the values of $w^{[l]}$ very close to zero. 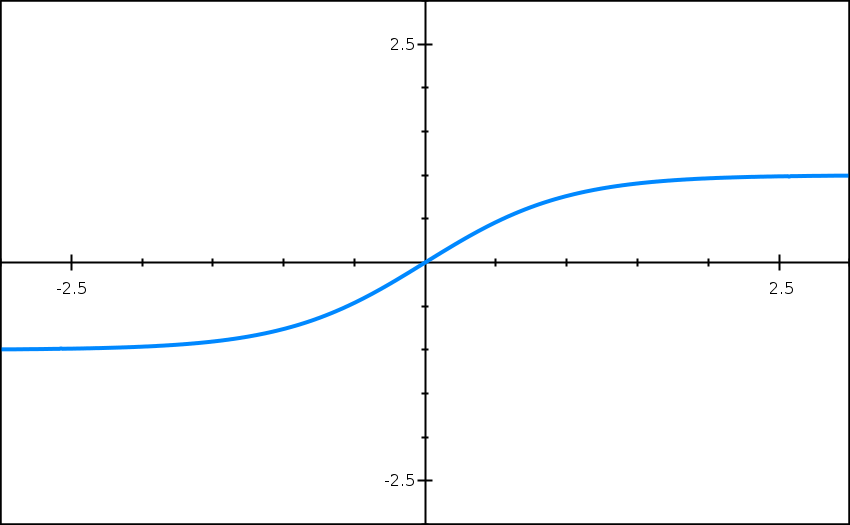 If the value of $z^{[l]}$ can be only a small range of values close to zero, our activation function will start looking like a linear function, as shown below: 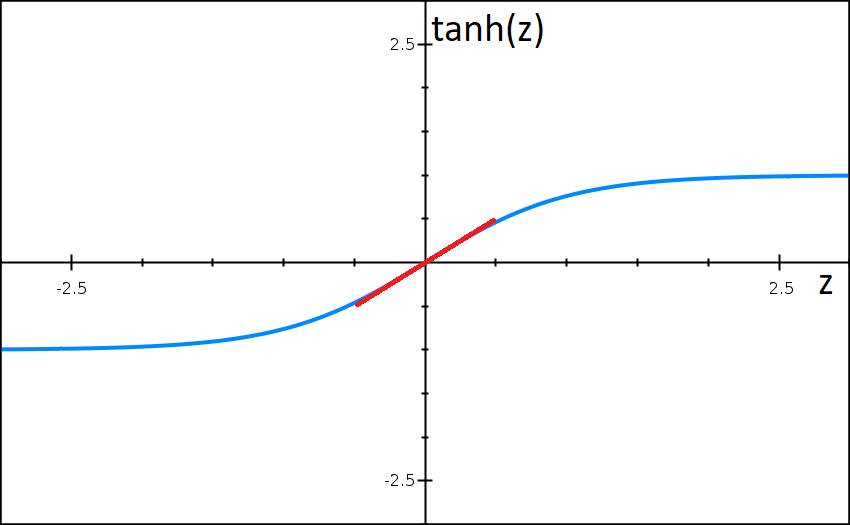 Of course, we don't (and won't) set our $\lambda$ parameter to a very large value, but rather set it to somewhere in between, which will get rid of our high variance problem and not cause high bias instead.

This illustration was also taken from Andrew Ng's course video:

Imagine we have a neural net that looks like the one pictured above, on the left.

To stop our model from overfitting our data, we can randomly knock-out some neurons while training our model. This in turn causes the model to be unable to rely on just a particular set of neurons, or a pathway of neurons, so it has to train multiple subsets of neural nets, which makes it much more difficult to overfit the data, since it never knows when some of the neurons will be knocked out. $$ S(i,j) = (I*K)(i,j) = \sum_m\sum_nI(m,n)K(i-m,j-n) $$

Other tips to prevent overfitting/bias

Let's say we're training our car on the following track: 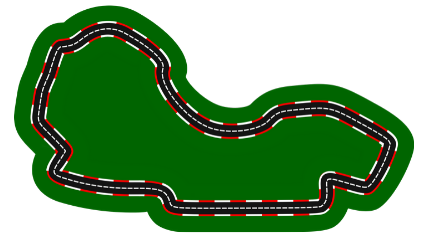 We run a few laps on the track and save our data. If we've only driven in the usual, counter-clockwise direction, we have inadvertently caused our model to be slightly biased to always turn a bit to the left. 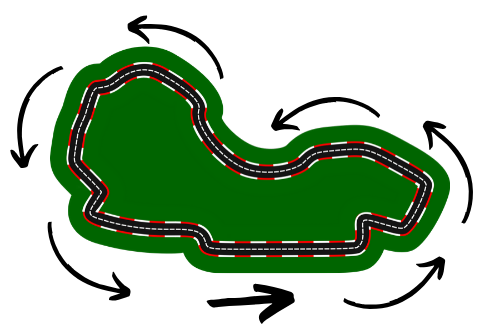 How to solve it

Other than driving the very same track, just in the opposite direction, you can simply mitigate this issue by augmenting your data with the same images, just horizontally flipped, thus getting: 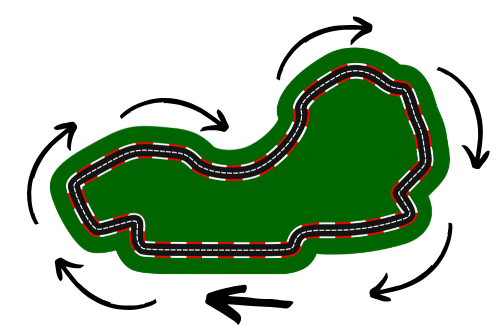 Now your car shouldn't be inclined much to steer to one side or the other for no reason.

Make sure to make copies of your JSON files and invert their steering values as well.

You can even apply preprocessing like this to your images to try and make it focus on the more important features such as lane lines:

Also, I wrote this just to have an excuse to make some artful Baby Yoda memes, which had to be put into this project somehow, so here goes: 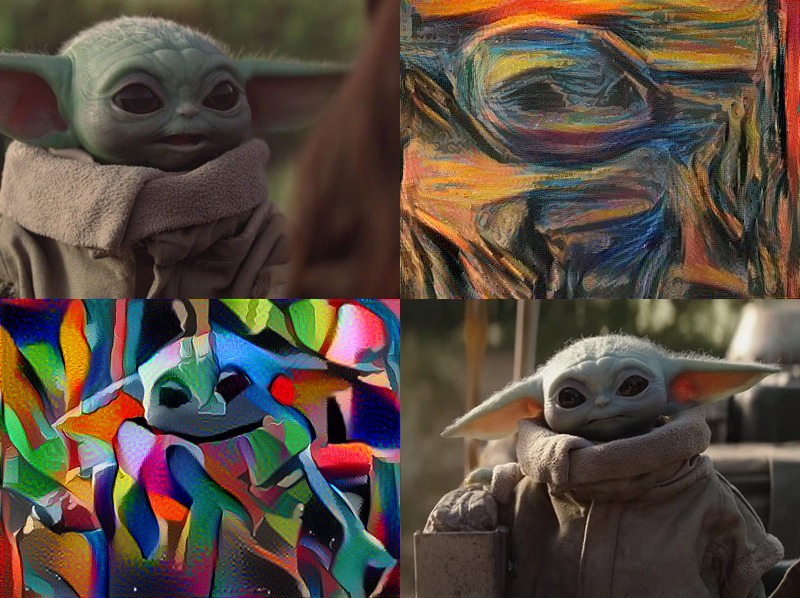 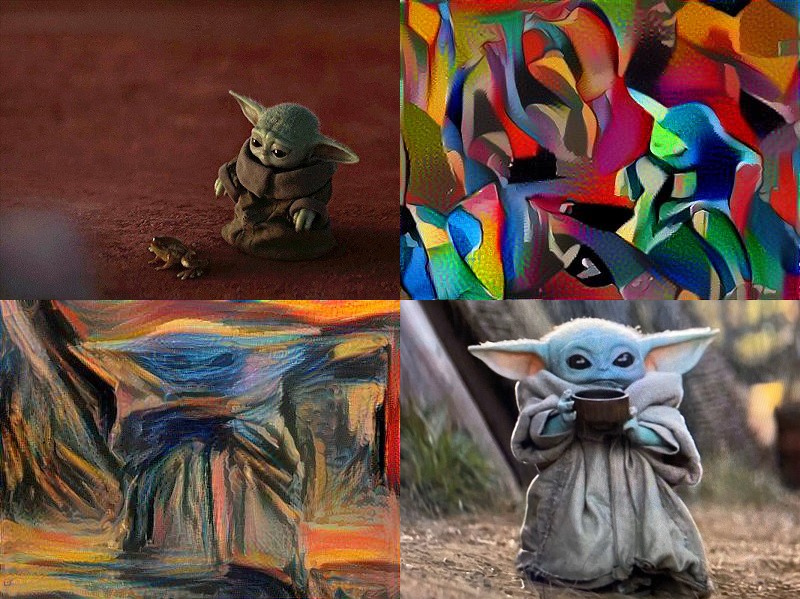 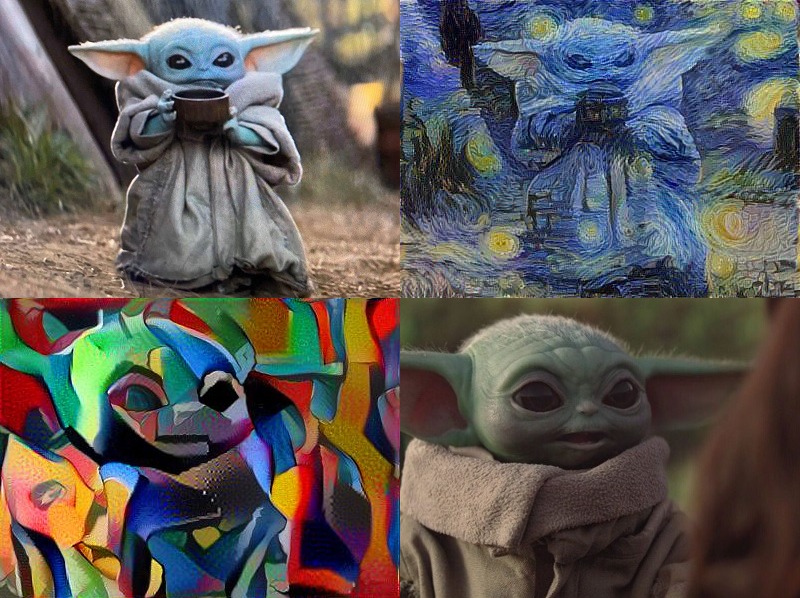 You could still tell that it's Baby Yoda, even though the images lost a lot of the original information about him, e.g. the hairs on his head. So in contrast, you could use this approach and still be able to identify lane lines on images, but just by focusing on the things that make us recognize them the most.

When training your model, you can often see the validation error getting lower over time, following the training error curve, but then at one moment you see it take off and get much worse over time:

One possible solution is stopping the training early, when you see the validation error starting to increase.

Just keep in mind that by doing so, you're now coupling two optimization problems that you were solving as separate before: the optimization of your cost function and the prevention of overfitting the dataset. By doing so, you're not doing quite the best job you could at minimizing the cost function, since it's obvious that the error could get much lower if the training wasn't stopped early, while you're simultaneously trying not to overfit your data.

One alternative could be using L2 regularization or some other regularization technique, but you can often see early stopping being used in practice. Just keep in mind the trade off you're doing.

We can combine these two metrics into a single number, as a harmonic mean of the two, which is called the F1 score:

++ F_1 = \frac{2}{\frac{1}{precision}+\frac{1}{recall}} ++
But why? Sure, this doesn't help much if you're just using a binary classifier like mentioned above, to see if something is X or not. Or even if you're classifying things into two classes.

But imagine trying to decide between three implementations of a classifier with 3 possible classes:

Which one is the best? Sure isn't easy to tell from the table above. At least not to me.

Now look what it would look like if we used the F1 score for all of the possible classes:

Looks much simpler than the first table, but still could be simpler. Since we're probably interested in our classifier working as best as possible over all classes, we can take the average of all of the 3 $F_1$ scores to get one simple number that tells us how well our classifier works:

The example above could've easily had a hundred different classes, with a dozen different implementations. That would've been impossible to look at even if you used $F_1$ scores for every class.

When trying out a bunch of different values of hyperparameters and implementation details, it's much faster to iterate and much easier to decide between all possible implementations when you have a single number that tells you how well it performs. And I believe this is a pretty good way to get one, even considering the amount of some fine-grained details you lose. You can always look them up after you eliminate some implementations, and have only a few you're actually considering.

One important thing to notice is that there could be other important metrics to look at other than how accurate our classifier is.

For an example, we could be making a classifier that classifies obstacles our car will collide with if we don't avoid them. Surely, we'd like to correctly classify as much of those as possible, so make a table, as the one above:

Cool, so we pick the third classifier. And our car crashes. Wait, wut?

We picked the best classifier in terms of it correctly classifying as much of the objects in our path as possible, but there's one thing we didn't look at; the time it takes it to classify an object.

So yeah, we did recognize most of the objects we were on a collision path with, but by the time that we did, the car had already crashed into them.

Taking that in mind, the second classifier is obviously the better choice.

So it's important to keep in mind that while we're trying to optimize one of the metrics of our model, we also have to pay attention to the other minimum requirements the model must have in order to actually be usable in the real world, as per our real-time necessary example.

Hyperparameters ordered by importance are:

A traditional way to choose hyperparameters is to sample them from a grid:

First we'd define a grid, which can either be a randomized or a regular grid, and then iteratively sample the parameters from it:

Keep in mind that the grid search approach suffers from the curse of dimensionality.

There's a lot of ways to do this, most frameworks even have built-in ways of doing this so I'd highly recommend you look into the topic of hyperparameter optimization.

Hyperparameters can get stale

Also keep in mind that you should re-evaluate your hyperparameters every once in a while, because as you get a lot more data, they can get stale.

They can also get stale if you get a new GPU/CPU, change your network a bit or for any number of reasons. Just re-evaluate them from time to time, depending on how much you're changing stuff around.

The more you do this stuff, the easier it'll get, and the more tricks you'll learn.

The thing about ML is that you have to rely on your intuition a lot. If a model is misbehaving, you can't simply set a breakpoint on it and debug it, there can be a plethora of reasons for it:

You have to keep trying and not give up. It can take a few days even to get your model to perform well, even on smaller testing datasets, depending on the complexity of the task you're trying to achieve.

Do your best to make sure that the things that you can control, e.g. the quality of your data and its distribution, are okay.

For the parts you can't directly see, like how your convolutional layers are doing stuff, you can use all sorts of tools like the visualization techniques we've done earlier to try and gain some intuition on how it's performing and what could go wrong.

That's pretty much it! Have fun experimenting with your model.